Skip to content
Looking To Our Past To Rebuild Our Future

Looking To Our Past To Rebuild Our Future 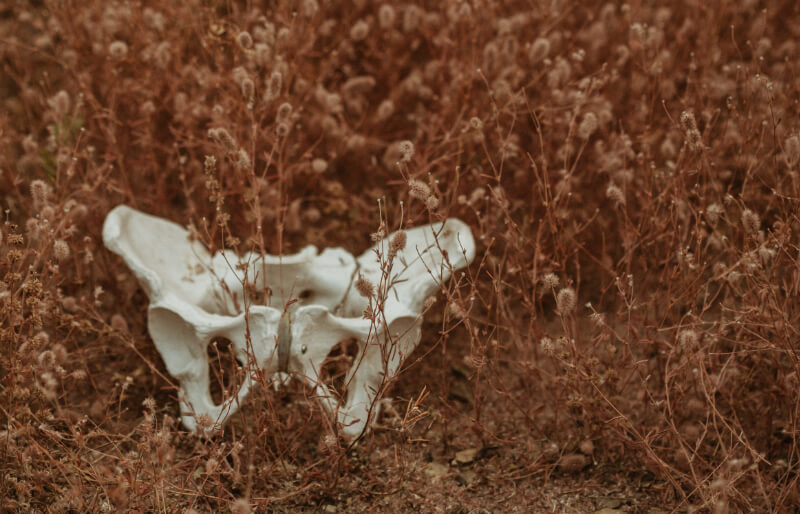 I don’t know about you, but I’m dreaming of returning to a healthcare system that supports and listens to people who bleed.

A system run by wise ones who are innately connected to the nature that surrounds them.

A system ruled by medicine carriers who know that within arms reach they have all the herbs they need to heal themselves and others.

A system centered around midwives and doulas who are at the very heart of the community to guide us all in celebrating life and death.

Instead, our current reality is a system that brushes off our deepest fears and anxieties and tells us to simply ‘get on with it’ while taking some kind of pill or medication.

And while modern medicine has made many life-saving advancements, something has been lost in the process.

Our humanness? Our compassion? Our dignity?

I know there’s a way to rebuild our future from the lessons of the past.

How can we take qualitative data of science while honoring our innate wisdom, power, and sense of knowing?

I know if you’re reading this, you’re asking that question too… And for you I have just the thing…

On the 17th October I’ll be hosting a FREE Womb Reclamation Training. Where you’ll learn how to unlock your feminine potential and unleash the intuitive power of your womb.

If you’re interested hit the button below to learn more…

I WANT TO LEARN MORE

Before our modern health system was introduced, we were the healers. 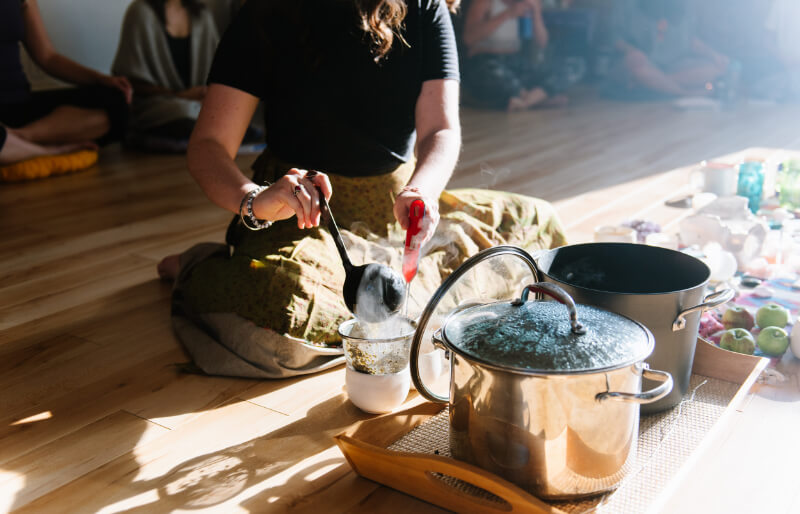 These female healers were the center of communities and a pillar of strength for people to turn to in times of life, death and uncertainty. These were women who were so connected to the world around them with vast knowledge of all the ways nature could heal us.

In Europe, before the 17th Century these women were the beacons of power and strength in the community.

Of course, if you want to take over a community – you target their source of strength.

You try to exterminate and defame their healers, their midwives, their herbalists, their medicine carriers. And that’s exactly what the patriarchy did, and in many parts of the world – is STILL doing.

It happens with such precision and expertise that many of the lies shared over 500 years ago are now internalized in the hearts of many with wombs as Truth.

At the height of the power struggle between the Catholic and Protestant churches in Europe, each was fighting for control of the masses.

One of the most effective ways to control people, is to place fear of the unknown or ‘the other’ in their hearts. A tactic still employed today by many politicians and people in power.

The ‘other’ is the archetype that receives all the inner projections of our own fear.

In this case, the fear was the devil – and according to the church, women or ‘witches’ were possessed by him.

After all, according to Malleus Maleficarum (which literally means “Hammering of the Witches”), written in 1486 by Heinrich Kramer, “When a woman thinks alone, she thinks evil.” 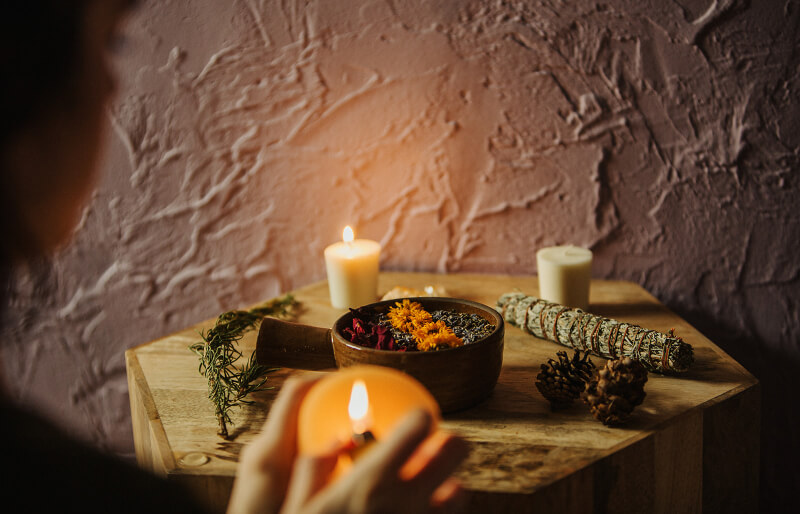 Out of fear of their power, one million women were killed for being witches between the 14th and 17th centuries in Europe.

But in reality, these witches weren’t connected with the devil at all. Rather, it was their innate connection to the Earth and the knowledge of the laws of cause and effect transmuted by nature that gave them such power.

Nature is unpredictable. Nature is almighty. Nature cannot be conquered. One who knows how to wield its power to heal is undoubtedly a force of nature themselves.

For their power, influence, and knowledge – these witches were vilified, labeled as evil and put to death purely for channelling the power of Mother Earth into society.

To maintain the new status quo, the churches introduced three new laws, punishable by death if broken. These laws fundamentally changed the way women of all kinds – not just the healers – gathered. 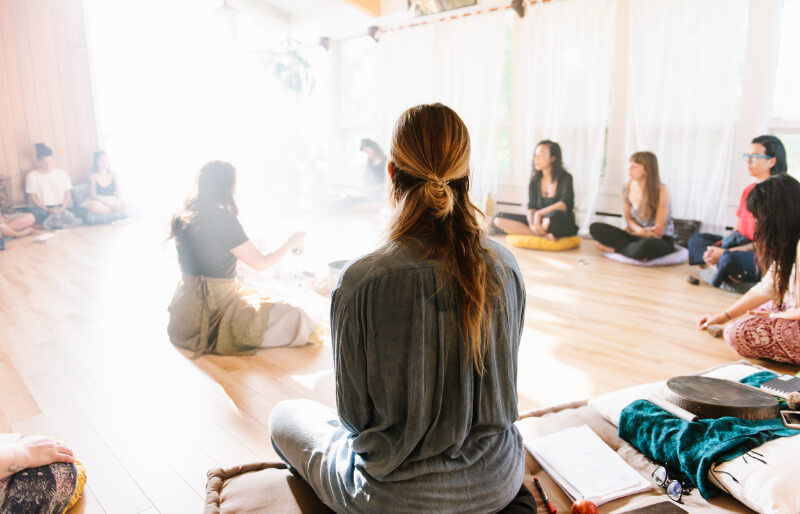 1. Gathering with other women was outlawed

Women were unable to gather without the presence of a priest for fear they would be practising witchcraft. The power that women had felt sitting in circle, the way they were able to heal themselves and others became something depraved.

And that belief still holds today. There is so much fear of the idea of women gathering and gaining their power from those spaces.

When women gather something shifts and magic happens. An internal flame of understanding and knowledge is enlightened. And that’s exactly what the patriarchy felt needed to be brought to an end.

2. Healing of all forms was forbidden

The idea of using plants to heal was so unfathomable that the churches felt as if the devils work must be involved somehow.

There was no understanding how plants such as dandelion root could help treat illness without some kind of intervention of evil. They spread the belief that this must be witchcraft.

But do you know what witchcraft actually is? It’s the power of knowing and understanding the elements and wielding them in their favour.

And that’s why still today when people talk of Ayurveda, Chinese Medicine or other natural forms of healing the eyes of medical professionals worldwide roll as they discount the healing properties of the natural world.

This final law is arguably the most ridiculous but also one that maintains its hold in our modern society so clearly.

If every inappropriate advance, comment or touch put them in front of a court of law. Or if they were vilified for the clothes they wore as if they were asking for whatever horrible act came their way.

Yes, that’s how ridiculous that law was.

Women were put to death for expressing their most natural self.

Again, the Hammering of the Witches from 1486 explains, “All witchcraft comes from carnal lust, which is in women insatiable… Wherefore for the sake of fulfilling their lusts they consort even with devils. More such reasons could be brought forward, but to the understanding it is sufficiently clear that it is no matter for wonder that there are more women than men found infected with the heresy of witchcraft.”

And don’t think for a moment these beliefs vanished with history… no. We still see them today in the way mistresses are defamed or the shaming of sexual assault survivors.

This law forced women to turn on each other as jealousy ran rife. And how can we come together and heal if we’re fighting for the resources of reproduction. And if we cannot gather, how can we overthrow the system that is oppressing us?

The patriarchy successfully dismantled the power of women in these three easy steps: 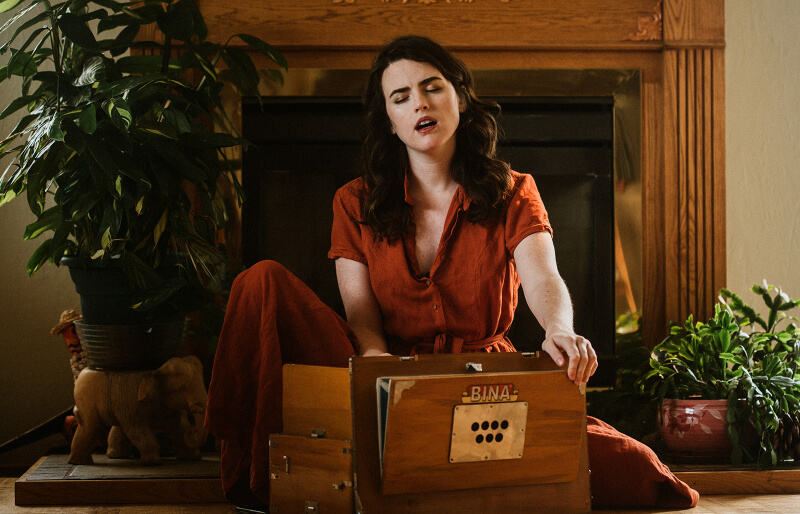 During this time our medical system changed too.

Instead of wise women at the forefront of medicine healing with herbs and practical rituals, the churches implemented some, frankly bizarre treatments in their place.

For instance, instead of using the numbing and antibacterial properties of clove oil to heal a toothache, Priests would instead repent the sins of sufferers while waving the cross over the side of their face that ached.

Or Priests were forced to be present during operations because there was no separation between the church and healthcare.

And though today that connection has been disrupted there still is great mistrust within the medical community towards natural and spiritual practices.

It seems as if our current health system views matters of conception, birth, death and healing with fear.

And we can see this in the way that pregnant people are often treated as if they’re infirm, weak and feeble. Or when we look at current statistics around the rate of Caesarean sections around the world.

C-sections now outnumber vaginal deliveries in parts of southeast Europe, Latin America and China. While in some private clinics in Brazil C-Section rates are up to 85%.

Western medicine and society no longer respects or has space for the wonder that is birth, instead, we’re controlled by the patriarchal system to be fearful of the power we have to conceive, carry and give birth.

Now I’m not saying all C-Sections or modern medical interventions are unnecessary. I know with the help of modern medicine many millions of lives have been saved.

But what I want to explore is the possibility of merging the old with the new and finding a more womb-centered way of healing.

The kind of healing that doesn’t overlook or brush aside very real and justified feelings of anxiety, grief and fear and instead listens to and honors these emotions.

And that work starts with you. Where you are given real tools to reconnect with your body, your womb, and your power.

The revolution starts within.

If you’re ready to join the revolution with me and 1000s of other wise womben then I have just the thing.

I’m hosting one of my favorite trainings of all time on the 17th October. This training will be available for FREE online and will start you on your path towards global healing.

I WANT TO BE PART OF THE REVOLUTION

Because together, we can rebuild our future learning from our past.

Why Your Anger Is Sacred

One of the emotions I’ve struggled with expressing the most in my life is anger. Maybe it was the fact that my father didn’t express his anger in a healthy way and I often felt silenced but I soon came to realize that I have a right to my emotions - all of them. And so do you.

An Ayurvedic Diet – How To Eat For Your Dosha

Are you ready to begin your healing journey through practical and ancient healing methods? Of course, you are. In this blog, I’ll be giving you sharing practical dietary advice so you can eat for your type.

I get asked all the time ‘how can I get educated on reconnecting to my cycle?’ Well here’s your answer, these 4 books will help you to reconnect to the wonder of your menstrual cycle.